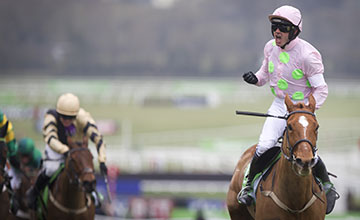 WILLIE MULLINS on Thursday gave the biggest indication yet that Annie Power and Faugheen, winner of the last two Champion Hurdles, are on the verge of returning to the track for the first time this winter.

Mullins told At The Races: “Both worked nicely this morning so I’m very pleased with them. Both horses are pleasing me a lot more now than they have been.”

Faugheen has not been seen on the track since his BHP Irish Champion Hurdle win last January, arguably the performance of his career. He achieved an RPR of 177, which ranks him as the best two-mile hurdler since Istabraq on that scale.

Annie Power made a late reappearance last season too, returning at Punchestown after Faugheen had been ruled out of the Champion Hurdle and taking his place at Cheltenham on the strength of her success there.

She too emulated Istabraq by going on to complete the Champion Hurdle-Aintree Hurdle double, which had last been achieved by that horse 17 years earlier.

Mullins seemed hopeful of bringing both horses back to a similar level of form compared to 12 months ago.

“We’re well on course with both of them,” he said. “We’ll see how they go between now and then [Irish Champion Hurdle]. I’d like to get Faugheen there and Annie Power to the mares race at Punchestown, that would be the ideal scenario.”

It is widely expected that only one of Faugheen and Annie Power will run in this year’s Champion Hurdle. The 2015 winner Faugheen is the 9-4 favourite, while Annie Power is 5-1 but only 2-1 with firms offering non-runner, no bet.

Winx Has To ‘Dig Deep’ For 28th Consecutive Victory

Henderson Dominance: A warning ahead of the Champion Hurdle

By continuing to use the site, you agree to the use of cookies. more information