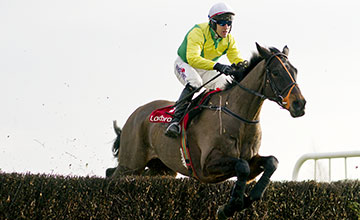 The last was omitted after a fall from outsider Letter Of Credit left jockey Phillip Enright in need of treatment on the track. Sub Lieutenant had looked in control jumping what became the last fence, but he was outbattled by Sizing John.

Black Hercules, who raced well off the pace in the early stages, briefly got involved around the last but faded late on, while early pace setter Smashing weakened from the turn in.

Winning jockey Robbie Power said: “When I rode him over two at Leopardstown he was flat to the boards. I knew I had plenty left the whole way round, he just does what he has to in the race. As soon as I picked him [Sub Lieutenant] up I knew I was going to get there.”

The winner had formerly been in the care of Henry de Bromhead, trainer of the second, though the two had never been stablemates as de Bromhead had only taken on Sub Lieutenant from Sandra Hughes this season.

The success was also a first for Sizing John since his second start over fences in November 2015. In four of his five starts in between he had finished placed behind Douvan.

The Kinloch Brae, formerly run as a Grade 2, had been won in the last two years by Don Cossack and Sizing John was cut afterwards for his own festival glory. He is a best-priced 10-1 for the Ryanair, having been available at 25-1 on Thursday morning.

Trainer Jessica Harrington was pleased with the winner’s performance, though stopped short of confirming him for the Ryanair, as he also holds entries for the Betway Queen Mother Champion Chase and Timico Cheltenham Gold Cup.

She said: “I was absolutely thrilled with him, he was very relaxed the whole way through and he picked up very quickly.”

Winx Has To ‘Dig Deep’ For 28th Consecutive Victory

Henderson Dominance: A warning ahead of the Champion Hurdle

By continuing to use the site, you agree to the use of cookies. more information